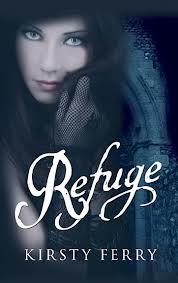 “A legendary dagger in the hands of a vampire slayer… A nineteenth century girl with nowhere left to turn… A modern-day field trip to Lindisfarne… When worlds collide and the only way out is a choice nobody should have to make, where do you find your refuge? Set within the sanctity of the Holy Island of Lindisfarne, off the Northumbrian coast, Refuge is a story interlinking modern day with a dark and terrifying past – and the story of the immortals who carry their hatred with them throughout the centuries.”

This is a multilayered book that spans many timelines. Normally that is very difficult to pull off but not only did Kirsty Ferry pull it off, she left you saying “Ahaa” at the end. This book was so well written, it was almost sculpted. From the start you can feel the gothic atmosphere and it immediately made me think of Stoker.

This really isn’t your predictable Vampire story- anything can happen and it often does, when you least expect it. Kirsty Ferry put a fresh spin on a tired genre by making her characters homicidal – verging on psychotic but yet, devilishly seductive. The relationship between Cassandra and Veva is a very complex and bizarre relationship; it reminded me of Meryl Streep and Goldie Hawn in “Death becomes her”.

Refuge is steeped in historical details and it is a thrilling ensemble book who characters all come together for different reasons on a vampirical pilgrimage. These day walking vampires, have centuries of intertwining pasts together but it isn’t until they reach the Refuge, that it all comes to a climactic end.

I loved this book because it was fresh and interesting. I found the characters compelling and exciting. I highly recommend.

I was lucky enough to catch up with the author for some questions and answers:

EPBR: What inspired you  to write Refuge?

KF: It started from a romantic pocket novel I tried to write which was terrible – I ended up hating the characters and said jokingly to my cousin at my birthday party, ‘I hate them so much I just want to kill them off . In fact, I might just turn them into vampires or something to get rid of them.’ So she said ‘Do it!’ And I thought, ‘Hmmmm, yep, that would work.’ I wanted to write a story about a local place as well, having used Hadrian’s Wall in my previous novel, and thought I could centre the story on Holy Island – the last place you would expect to find a creature of the night. It all just fell into place from there. And I actually love my characters now. They are far more suited to the dark side of love!

EPBR: Do you have any other vampire plans for more books?

KF: I left Refuge open-ended. There is potential there for another story – I have a couple of characters who I kind of left hanging there subtly to bring them back from the undead again – but I haven’t thought about a plot yet. Maybe one day…

EPBR: Who is your favourite Vampire?

KF: Angel from Buffy- just has to be!

EPBR: What is your favourite book/ and or vampire film?

KF: Oh it has to be bookwise – Berni Steven’s Dance Until Dawn and filmwise, Johnny Depp’s Dark Shadows.

*Tommorow I will be reviewing Berni Steven’s Dance Until Dawn

“Three eras. Three young women. Three Guardians, separated by centuries. Aemelia: the Christian daughter of a Roman Commandant. Meggie: accused of witchcraft in the seventeenth century. Liv: a twenty-first century teenager, intent on finding information for a project. When horrors from the past threaten her, Liv discovers she is a Guardian of the mystical Coventina’s Well. She must work with the spirits who linger there, and use their combined power to banish evil from the sacred spring. Set amongst the wild landscape of Hadrian’s Wall in Northumberland, the Guardians must confront the tragic past and the potential future in order to help each other survive.”

venge of the modern vampire-

A strange metamorphosis has occurred to the vampire over that past 30 years. Vampires went from the mediaeval scourge of the darkness to vegetarian emos. That is a huge gap after all those centuries. So what happened?

Vampire have always been depicted as the spawn of Satan throughout history. From Vlad Tepes to Elisabeth Bathory- Vampires have always been evil predators that would kill you in seconds. I think it all started with Lord Byron’s Vampyre. He was the first to romanticized the vampire. Then came Bram Stoker’s Dracula. Still a bad boy, but he used seduction rather than brute violence to get his pray. However, when the first motion picture of Nosferatu hit the cinema in 1922, he was played by a rodent faced Max Shrek that in no way could be considered sexy.

It would take another twenty years before Bella Lugosi. Bella did make his Dracula a bit more sexier, but the character was still the evil villain. Twenty more years later we have the Hammer years with Christopher Lee reinventing the genre for a whole new audience.. Twice as sexy as Bella Lugosi but also twice as evil, not entirely at the modern vampire yet.

For another twenty years, vampires continued to be evil blood sucking bastards, but then “Interview with a vampire” hit our screens. The book had a cult following since it’s release in 1976 but it was not until Tom Cruise was mentioned that people took notice. Anne Rice’s vampires had humanity, albeit, possibly a soul. The talked openly  about regrettable mistakes and loss. Although widely remarked as being homo-erotic, here were vampires you could relate to.

The the flood gates opened- Vampire were cool and hip for the first time in history. “Buffy the Vampire” even made them quite lovable. Angel struggles with his vampire identity while trying to maintain relationships and his soul. For the first in history we have a non threatening male vampire would you would want to be friends with.

Charlaine Harris’s Sookie Stackhouse novels and the subsequent television show brought us deeper into the political of vampirical hierarchy  and further de-mystified them. Then it happened- Twilight. If you listen closely, that sound you hear, is Vlad Tepes turning in his grave. With twilight we have the first emasculated vampire who would rather listen to emo music in a darkened room than feed off the villagers.

Yet again Vampires are repulsive- not because they have rat faces and feed of you like a parasite; but because they are angst ridden, emotional crippled teens. Don’t get me wrong, I did enjoy the Twilight books, but they did nothing for Vampires Street Cred.

Maybe it is human nature to parody that which scares us, or we just reached a point where there is nothing more that can be added to Vampire mythology. Either way- the only vegetarian vampire that I will take seriously is Count Duckula and twilight sparkles should be left to My little pony. I am hoping that Guillermo Del Toro’s The Strain Television series bring some gravitas to genre and some much-needed Vampire P.R. Luckily the Queen of Vampires, Anne Rice is here to save the day by releasing a new Lestat book called “Prince Lestat” It could not come at a better time to kick-start the vampire genre again.

This week I am very lucky that I am reviewing Four new vampire books this week. Each with its own unique spin on the genre. Vampires will always be with it, as they have been for centuries- but with the help of authors like Kirsty Ferry, Dan Ribot, Berni Stevens, Jane Lovering and Sarah Tranter;  Vampires can be exciting again.

I also caught up with the lovely Katie Oliver, Author of the “Dating Mr. Darcy Series” for some vampire Q&A: 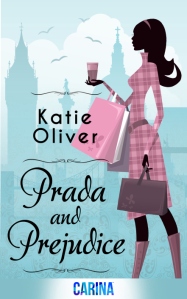 EPBR:Would you ever write a vampire novel?

KO:I would!  I love a good vampire yarn (Anne Rice’s “Vampire Chronicles,” and Matt Haig’s The Radleys, about a vampire family trying to ‘pass’ as normal, are genius).  But with so many great books already out there, the challenge is to write within genre conventions and still deliver a story with a twist. It’d be a LOT of fun to try, though..
Perhaps I could pen a vampire chick lit novel, with a female vamp who spends eternity shopping for shoes, and the perfect shade of… BLOOD? MWAH ha ha…

EPBR:What is your favourite vampire book and or film?

Interview With the Vampire by Anne Rice is evocative, scary, moody, and unforgettable. I fell in love with the nineteenth-century New Orleans setting – the moss-draped oaks, the antebellum mansions, the French Quarter, and the dark, mournful beauty of the bayou.  Sting read the book and liked it so much he wrote a song about it – “Moon Over Bourbon Street.”

EPBR: Who is your favourite vampire?

KO: As far as movie vampires go, Frank Langella was the first actor to bring sensuality to the role of Dracula, giving the famous fiend a sexy new dimension. For laughs, you can’t beat George Hamilton in “Love at First Bite” or the campy Jonathan Frid as Barnabas Collins in “Dark Shadows.” But my favorite literary vampire is Bram Stoker’s Dracula. As a suave gentleman of means by day and a ruthless bloodsucker by night, Count Dracula is diabolical and unparalleled in fiction. But my favorite vampire of all?  It’s got to be Sesame Street’s The Count, of course! One! One vampire bat! Two! Two vampire.

Here are some other great books for you to enjoy: 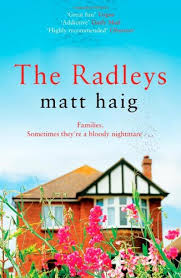 The Radleys by Matt Haig

“Move over, Cullens! The Radleys are an average family living in the suburbs –
they just happen to be vampires. As funny as it is scary!” (Bliss) “A refreshing
alternative to much of the paranormal fodder out there.” (The Bookseller) “We
should expect something different from the fare provided by Stephenie Meyer and
her numerous imitators. And we will not be disappointed.” (The Irish Times)
“Pointed, clever and witty.” (The Independent)”

A Discovery of Witches by Deborah Harkness

The Vampire world is in crisis — vampires have been proliferating out of control and burnings, huge massacres, have commenced all over the world. Old vampires, roused from their earth-bound slumber, are doing the bidding of The Voice: which commands that they indiscriminately burn vampire-mavericks in cities from Paris to Mumbai, Hong Kong to Kyoto and San Francisco.

We are back with the worlds and beings of Anne Rice’s legendary Vampire Chronicles — in present-day New York and Ancient Egypt, 4th-century Carthage, 14th- century Rome, Renaissance Venice; with Louis de Pointe du Lac; Armand the eternally young, whose face is that of a Boticelli angel; Mekare and Maharet; Pandora and Flavius; David Talbot, vampire and ultimate fixer from the Secret Talamasca; and Marius, the true child of the Millennia. These come together with a host of new, seductive supernatural creatures in this large, luxuriant, fiercely ambitious novel, to seek out who — or what — The Voice is, and to discover the secret of what it desires and why.

And, at the book’s centre, is always and forever the seemingly absent, curiously missing hero-wanderer, the dazzling, dangerous rebel-outlaw — the great ‘hope’ of the Undead, the dazzling Prince Lestat…


Don’t forget to check out the Facebook page for news, freebies and other fun.

Today’s quiz is “Are you a Vampire” from the BBC Cult website. Don’t forget to post
your results, as we love hearing from you!

Music reviews website. I only write reviews of music that I love.

Reviews, Essays and Analysis of Film and Art By Adam Scovell